New book by Andrew Shanken: The Everyday Life of Memorials 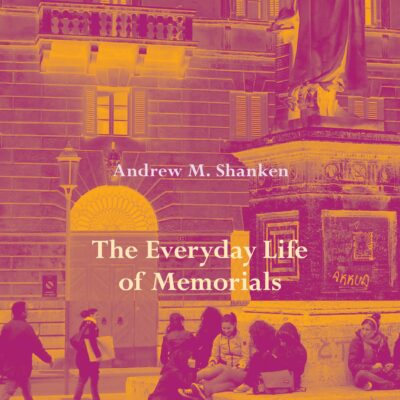 Analyzing their relationship to the pulses of daily life, professor of Architecture and Director of American Studies, Andrew M. Shanken investigates the fixture of memorials within modern cities in his latest book “The Everyday Life of Memorials.”

Memorials are typically understood as sacred sites, for mourning or commemoration. They also figure as political places where groups of citizens battle over the meaning of events. Most of the time, however, memorials take their rest as ordinary objects, part of the street furniture of urban life. They only “turn on” for special days, such as Memorial Day, or at heated moments, as in August 2017, when the Robert E. Lee monument in Charlottesville was overtaken by a political maelstrom.

Shanken’s book is about the everyday life of memorials. It is a study of the habits of placement and the meaning of where memorials end up, get moved, and are given new meanings by being absorbed into the everyday. Shanken’s close historical readings of memorials, both well-known and obscure, and his plumbing of quotidian experience bring two distinct strands of scholarship together: the study of the everyday and memory. From the introduction of modern memorials in the wake of the French Revolution, through the recent destruction of Confederate monuments, memorials have oscillated between the everyday and the “not-everyday.” In fact, they have helped constitute the very structure of these categories, particularly within the development of modern cities.

“The Everyday Life of Memorials” reveals how indeterminate these supposedly permanent interventions are, how they get turned on and turned off, slipping between the ordinary and extraordinary. Finally, observing how people behave at memorials and what memorials ask of us shows just how strange the commemorative infrastructure of modernity is. The book combines archival and fieldwork, mostly in Europe and the United States, but its insights can be applied globally.

Andrew Shanken is also the author of “194X: Architecture, Planning, and Consumer Culture on the American Home Front” and “Into the Void Pacific: Building the 1939 San Francisco World’s Fair.” He has published widely on architecture and memory, including Planning Memory: The Rise of Living Memorials in the United States during World War II, which won the Arthur Kingsley Porter Prize in Art History.